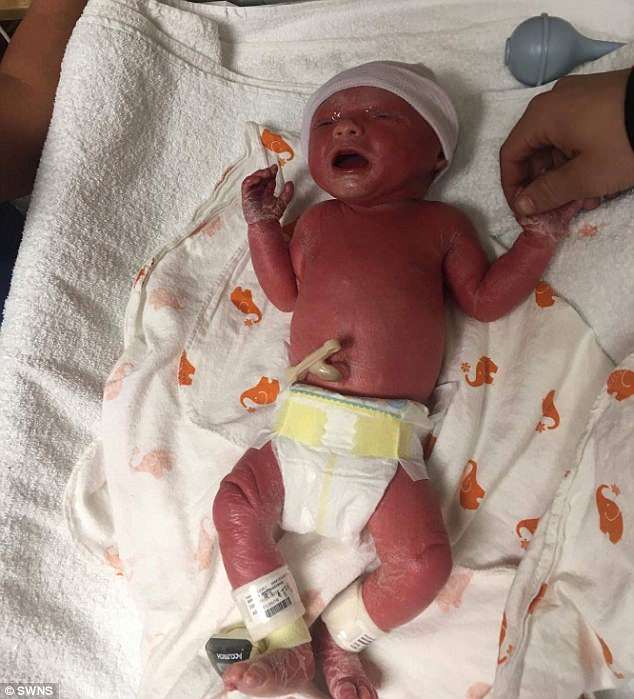 A few days after he was born Carter Padelford from Las Vegas, Nevada, was diagnosed with a rare genetic condition called Lamellar Ichthyosis.

Lamellar Ichthyosis is a condition that mainly affects the skin. Infants with this condition are typically born with a tight, clear sheath covering their skin called a collodion membrane. This membrane usually dries and peels off during the first few weeks of life, and then it becomes obvious as the affected babies have scaly skin, and eyelids and lips that are turned outward. Infants may develop infections, an excessive loss of fluids (dehydration), and respiratory problems.

The disorder affects one in 100,000 people in the U.S. and disrupts the normal formation of the outer layer of the skin, causing sufferers to develop dark, plate-like scales covering most of their body.

The infants tight red skin would often crack painfully and his body was unable to regulate his temperature as he could not sweat properly due to the condition.

His parents Shai-Anne Sifford and Zach Padelford, both 21, were forced to slather him with coconut oil and shea butter and give him two oatmeal baths a day to soothe him and they would have to exfoliate the scales of skin away every three days – a very painful process which they would dread.

‘When he was born, his skin was as red as a tomato and so tight to touch’, his mother recalled.

‘It looked painful, he couldn’t even close his eyes, he was diagnosed with lamellar ichthyosis three days later.’

‘Basically it means that his skin builds up into scales like a fish and it limits his ability to move. It stops his ability to sweat which means he’s intolerant to temperature.’

‘Babies with this are at a greater risk of Sudden Infant Death Syndrome (SIDS) because if they get too warm they can suffocate,’ she added.

‘He couldn’t even close his eyes. I was using a no-touch thermometer about eight times a day to keep his temperature stable.’

Shai-Anne tried to treat the condition with Amlactin, an emollient for very dry skin conditions which contains alpha hydroxy acids that was recommended by doctors, but it didn’t seem to be working.

‘Doctors didn’t offer us much advice or help. I feel they neglected us because they didn’t know what was going on,’ Shai-Anne said. ‘They told me to keep him covered and to avoid baths and to come back in two years when he was two.’

‘It was traumatizing. There were no road signs and so few treatment options,’ she continued. ‘I used to spend my days just lathering him with coconut oils and homemade organic creams.’

After reading an article about the benefits cannabis oil and how it can have positive effects on chronic skin conditions, Shai-Anne decided to try the oil on Carter and over a period of just seven months the scales on his skin have almost completely disappeared.

The use of cannabis oil is legal in Nevada where the family live, but it is currently only available to people over the age of 21.

‘I’m a medicinal user so I decided to try it,’ she said. ‘I began to put it into the homemade creams with shea butter and essential oils that I was already making.’

The parents started treating Carter with cannabis oil in August 2017 and they say that he is a completely different toddler than he was before the treatment.

‘Seven months later he doesn’t even look like the same child,’ Shai-Anne said. ‘He used to have no hair because of his scales but now his hair is starting to grow.’

‘He used to have open sores that would be bleeding, but his skin has almost completely cleared up.’

Carter’s skin no longer splits and cracks, and for the first time, he is able to sweat like a normal child.

‘His progress has been insane,’ Shai-Anne added. ‘His eyes could never close completely but since I’ve been using the oil on his eyelids they are almost closing all the way.’

The mother said she fears Carter’s condition would regress if she were to stop using the oil, and she admitted that she feels let down by the medical system.

‘The standard way to treat this is a drug called Amlactin, which is a lactic acid that burns away the top layers of skin,’ she said.

‘Other patients I’ve met with this disorder say it feels like they’ve been put in an oven when they apply it.’

‘I’ve tried it for Carter but it just wasn’t working. Other than that we’ve had no support from doctors in terms of a treatment for this. I feel without the cannabis oil, he wouldn’t have a life.’

Shai-Anne said that other sufferers she has met have been so amazed by Carters pictures and his progress that they are even thinking about trying cannabis oil for themselves.

‘I just want him to have a normal life, and this is the only treatment that has offered him the chance at that.’

Carters parents have made a Facebook page called Loving Carter which is dedicated to documenting Carters treatment for his condition Lamellar Ichthyosis using alternative treatment methods.

Have a Long and Healthy Life

Helping you get the life you've always wanted

My life and other voices

Taking you through the steps of life.. Trying new things or losing some things..Everyday will be a different experience and a different view...

All invisible illnesses are important
Artificiallyhip

"At The End Of The Day... Work Smarter, Not Harder"